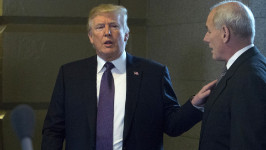 A Democratic congresswoman laced into Minority Leader Nancy Pelosi on Wednesday, suggesting the top House Democrat “set women back and — quite frankly, our party back — decades” by failing to more forcefully confront allegations of sexual harassment by veteran Democratic Rep. John Conyers.

Speaking to reporters at the Capitol, Rep. Kathleen Rice of New York said Pelosi’s appearance on “Meet the Press” on Sunday — when she raised questions about the accounts of Conyers’ accusers and described the Michigan Democrat as an “icon” — ceded the party’s moral high ground on sexual harassment issues, especially because one of Conyers’ accusers is bound by a nondisclosure agreement.

“I think that her comments on Sunday set women back and — quite frankly, our party back — decades,” said Rice, who is advocating for legislation that would expose a slew of hidden, taxpayer-funded settlements for sexual harassment by lawmakers and aides.

“I think that we ceded the moral high ground on Sunday when our leader said on ‘Meet the Press’ that John Conyers was an icon and we don’t even know who these women are, when she was fully aware that the woman in question was bound by a nondisclosure agreement,” Rice said. “I think we had an opportunity to stake that moral high ground when you have a president who is supporting a man for Senate who — all credible allegations that have not been refuted — showed him to be a predator of teenage girls.”

A daily play-by-play of congressional news in your inbox.

By signing up you agree to receive email newsletters or alerts from POLITICO. You can unsubscribe at any time.

A Pelosi spokesman said Rice’s comments were not an accurate portrayal of the minority leader’s sentiment.

“The leader was very clear on Sunday that no matter how great an individual’s legacy, it’s not a license for harassment,” said the spokesman, Drew Hammill.

Hammill also noted that Pelosi, in her “Meet the Press” interview, said she favored eliminating nondisclosure agreements that silenced victims from speaking out.

“[A]ll of these nondisclosure agreements have to go,” she told NBC’s Chuck Todd in the interview. Since that interview, Hammill added, Pelosi has said she believes Conyers’ accusers and subsequently spoke to one of them about her story. She also has signaled support for legislation from Rep. Jackie Speier (D-Calif.) that would reform the system of harassment reporting in Congress to protect victims.

Rice was among of a group of Democrats who vocally opposed Pelosi’s reelection as Democratic leader when the caucus voted after the November election to give Pelosi another term.

Rice’s comments escalate her already pointed criticism of Pelosi’s leadership — and of her Democratic colleagues, who she said earlier Wednesday were not confronting sexual harassment issues within their own ranks seriously enough. She’s one of three Democratic lawmakers, along with Reps. Pramila Jayapal of Washington and Earl Blumenauer of Oregon, who have called for Conyers to resign immediately.

Rice left early Wednesday from a closed-door Democratic Caucus meeting and told reportersshe bailed because she didn't think her colleagues were approaching the harassment issue seriously. A Democratic aide said Rice exited after Pelosi spoke about the issue and also missed at least a portion of the comments from eight Democratic lawmakers who addressed harassment issues.

"There was a lengthy discussion of sexual harassment policies and reforms needed," the aide said.

This article tagged under: