Feinstein, Pelosi, Escobar sending paid staff to Mexico to teach illegals how to cheat their way into the US in order to rig national elections?

If there's any question left about Democrats having a political interest in fuelling the border surge, read no farther than this shocking straight news item in the Washington Examiner:

A Democratic congresswoman is sending staff to Mexico's northern border town of Ciudad Juárez to find migrants returned from El Paso, Texas, under the "remain in Mexico" policy, then coaching them to pretend they cannot speak Spanish to exploit a loophole letting them to return to the U.S.

The National Border Patrol Council's El Paso chapter and several Customs and Border Protection personnel told the Washington Examiner aides to Rep. Veronica Escobar, who took over 2020 Democratic presidential candidate Beto O'Rourke's district, and the local Catholic diocese have interviewed thousands of migrants in Juarez over the past few weeks to find cases where Department of Homeland Security officials may have wrongly returned people.

"What we believe is happening is Veronica Escobar's office is going ... to basically second-guess and obstruct work already done by the Border Patrol," said one senior union official, who shared evidence with the Washington Examiner from concerned CBP managers and rank-and-file members. Those documents have been held to protect identities.

The Examiner report notes an accidentally left file from the congresswoman's office as evidence that the coaching has been happening.  This isn't anything like Sen. Cory Booker's stunt in escorting would-be asylum-seekers across the border, which, however questionable, was nevertheless a legal process.  This is out-and-out fraud, by a member of Congress sworn to uphold U.S. law, but now using U.S. taxpayer dollars, via her staff, to teach migrants to give false statements to immigration officials to ensure that they can stay in the States.  People go to jail for that — marriage fraud, Social Security fraud...now language fraud.

The Examiner notes that the fraudy language claims are based on a loophole in asylum law, which states that if someone can't speak Spanish, he doesn't have to remain in Mexico to wait out his asylum claim in his first country of refuge.  Such people, and whatever illnesses they may be bringing with them — hello, ebola — can stay here instead.  If someone can't speak Spanish, say, as a Haitian Creole-, or a Mexican Nahuatl- or South American Quechua Indian–speaker, he gets to come up here, where undoubtedly the English will be just as incomprehensible, but the welfare benefits will be rich, given that he won't be able to make a living.

Fraud doesn't bother Escobar, whose legislative work amounts to advocating for the interests of foreigners.  The ends always justify the means.  The ends?  A foreign border surge where everyone surging is able to get in.

That if nothing else shows how Democrats benefit from the border surge, through padded census numbers in "dead" low-turnout districts where practically no one can vote legally to illegally cast ballots to the expanded welfare state in their districts, which means more dollars.

This is clearly a crime that the congresswoman must be held to account for.  If illegals can't be held responsible for crimes they commit, then maybe holding their sponsors to account should send the message.

It’s another dirty little secret that, for the first time, is being called out openly by some even as the far-left media continues to work to hide the truth from the American people.

Congressional districts are allocated by CITIZEN population based upon the 10-year census. That’s why Democrats and the media are now so opposed to having a citizen question included in the census. They don’t want Americans to know how many illegals are directly influencing the U.S. government. These millions of illegals are canceling out the votes of citizens and reshaping Congress, meaning those illegals are creating a Congress that works for them and not for you. If you’re okay with this go ahead and move on. If you think this is a serious breach of representative democracy then you would do well to share this information with others. Remember how much the Democrats and far-left media cried foul over some Russian social media election cycle posts? They called it an attack on America. And yet these same Democrats and far-left media openly advocate for millions of illegals voting in our elections and influencing seats in Congress. 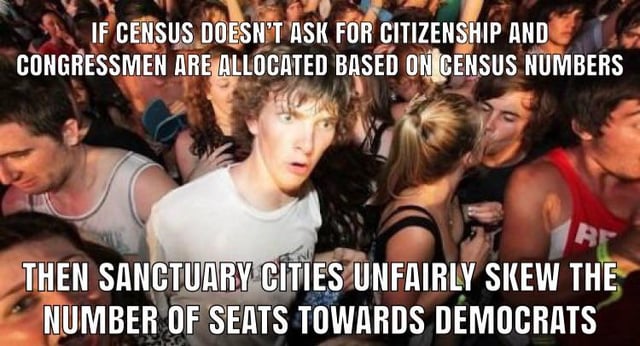