Tesla had a clear message to DeWitt Lambert, a black employee alleging racial discrimination: take our money and stay quiet.

The message, which a lawyer shared with the Guardian this week, provides a stark illustration of what some say is Tesla’s aggressive legal and media strategy in the face of serious complaints and potential negative press. The controversial PR tactics of Elon Musk’s car company have been on full display this week as the corporation has worked to publicly blame the victim of a fatal crash involving its autonomous technology.

The defensive statements amid the current tragedy and the settlement offer in Lambert’s labor dispute provide a window into the way Musk’s firm has tried to silence critics – or publicly attack them. It’s a familiar approach in Silicon Valley, where companies work to block bad publicity by keeping complaints out of courtand resolving high-profile disputes behind closed doors.

But some say the tactics are particularly intense at Tesla, a firm that often receives fawning coverage from the tech press surrounding Musk’s ambitious projects and celebrity status. 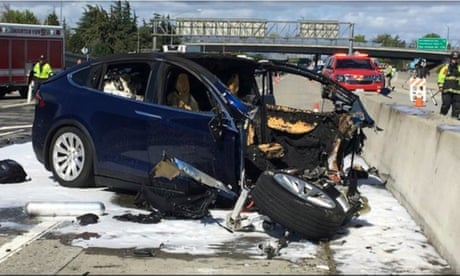 Tesla car that crashed and killed driver was running on Autopilot, firm says

Lambert, an electrician hired as a production associate in 2015, alleged in a harassment, retaliation and discrimination lawsuit that he was subject to “repeated racist epithets for months”, including “violent” rhetoric and attacks using the N-word. Last year, Tesla emphatically denied the claims in lengthy statements that sought to cast doubts on Lambert’s character and alleged that his lawyer was engaged in a “media blitz in an attempt to create a disingenuous narrative”.

Lambert’s attorney, Larry Organ, who has faced repeated criticisms from Tesla surrounding his civil rights litigation, shared the attorney’s settlement email with the Guardian as an example of the corporation’s efforts to stop bad press and silence workers with complaints.

The March 2017 email from Maron said if Lambert rejected the settlement and spoke out, “we will of course point out all of the facts in the attached document”. The document, according to Organ, attacked Lambert’s character.

Organ further said Tesla had offered to have Musk meet Lambert as part of a settlement.

“Tesla is a big corporation, and they feel like they can bully people,” Organ said in an interview.

“And shut them up with money,” added Navruz Avloni, another attorney representing Lambert.

A Tesla spokesperson did not deny the contents of the email, but alleged that Maron was responding to Organ’s “breathtaking” demand for money and threat to go public with a story.

Organ told the Guardian the offer they discussed was just under $1m: “It seems to me they put a fairly low value on stealing a man’s dignity.”

Sign up for Guardian Today US edition: the day's must-reads sent directly to you

There are numerous examples of highly combative PR and legal strategies by Tesla in the wake of scandal.

This week, attorneys for Huang’s family alleged that Tesla’s Autopilot feature was “defective” and “likely caused Huang’s death” when the car collided into a median. Tesla, however, said it was Huang’s fault: “The crash happened on a clear day with several hundred feet of visibility ahead, which means that the only way for this accident to have occurred is if Mr. Huang was not paying attention to the road, despite the car providing multiple warnings to do so.”

Tesla’s statement expressed condolences to the relatives, who gave a television interview about their grief. But the company also said: “The reason that other families are not on TV is because their loved ones are still alive.”

On Thursday, Tesla also went after the National Transportation Safety Board (NTSB), a US agency that accused the company of improperly releasing information about the crash investigation.

“It’s been clear in our conversations with the NTSB that they’re more concerned with press headlines than actually promoting safety,” Tesla said in a statement announcing it would make an “official complaint to Congress”.

Tesla has previously attacked the media in response to reporting on discrimination claims. After a female engineer shared her allegations of harassment with the Guardian, Tesla issued lengthy statements criticizing the woman and ultimately fired her, accusing her of pursuing a “miscarriage of justice”. Tesla has also vehemently denied her underlying claims. Musk has also been personally defensive about claims that his factory is unsafe for workers. 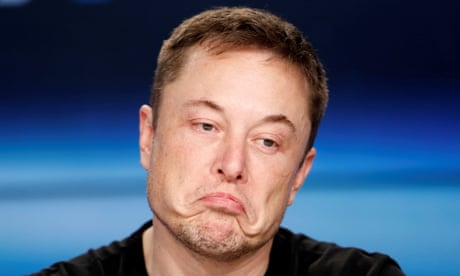 After the first fatal crash involving Autopilot in 2016 – when Tesla’s technology did not prevent a car from colliding with a large white truck – the company defended its product.

THESE ARE THE FACTS THAT TESLA MOTORS AND ELON MUSK WILL DO ANYTHING (EVEN THE MOST HORRIBLE THINGS YOU CAN IMAGINE) TO COVER UP:

Elon Musk exists because he bribed DNC politicians and Senators Feinstein, Reid, Boxer, Harris, Clinton and Pelosi to give him free taxpayer cash and government resources from the Dept. of Energy and the Calif treasury. DOE has been covering-up organized crime activities at DOE in which DOE funds are being used as a slush-fund to pay off DNC campaign financiers and to pay for CIA/GPS Fusion-Class attacks on Silicon Valley business competitors of those DNC campaign financiers who DOE staff share stock market holdings with. Elon Musk is a criminal, a mobster, an asshole, a bald fake-hair wearing, plastic surgery-addicted, douchebag, woman abusing, sex addicted, tax evader. Musk exploits poor people and child slaves in the Congo and Afghanistan to mine his lithium and Cobalt. Musk spends billions per year to hire Russian trolls, fake blogger fan-boys and buy fake news self-aggrandizement articles about himself. Musk thinks he is the 'Jesus' of Silicon Valley. Fake News manipulator Google is run by Larry Page and Larry is Musk's investor and bromance butt buddy. Musk uses massive numbers of shell companies and trust funds to self-deal, evade the law and hide his bribes and stock market insider trading. A huge number of Tesla drivers have been killed and Musk covers it up. The DNC and the MSM refuse to allow any articles about Musk's crimes to be printed because they benefit from Musk's crimes. Musk has been professionally diagnosed as a 'psychotic narcissist.' In EVERY blog that you read that mentions 'Musk', at least 1/3 of the comments have been placed their by Musk's paid shills. Musk holds the record for getting sued for fraud by his investors, wives, former partners, employees, suppliers and co-founders. Elon Musk has gone out of his way to hire hundreds of ex-CIA staff and assign them to "dirty tricks teams" to attack his competitors and elected officials who Musk hates. Musk never founded his companies. Musk's "Starlink" satellites are domestic spy and political manipulation tools - never get your internet from one. He stole them in hostile ownership take-overs. The same kind of EMF radiation proven to cause cancer from cell phones exists in massive amounts in a Tesla. Musk can't fix a car or build a rocket and has almost no mechanical skills. Musk is a lying con artist and partners with Goldman Sachs to rig the stock market. Over 1000 witnesses can prove every one of those claims in any live televised Congressional hearing! Senators Dianne Feinstein, Harry Reid, Nancy Pelosi, Kamala Harris and their associates own the stock in Tesla Motors and/or it's suppliers and mining companies. That is why they criminally help cover-up investigations of Tesla!